Lee Ki Yeon,
Her Transformation from a Painter to a Designer 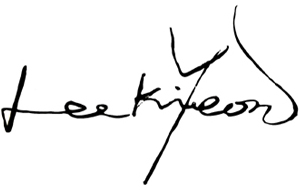 Born in Seoul, Lee Ki-Yeon received her bachelor’s degree in sculpture at Hongik University and pursued her graduate work in fashion design at the same university. As the founder of the are group “Dureong”, she initiated the national art movenent and joined the list of “Top twenty artists in the 1980’s”. Currently, she works as the CEO of Jilkyungyee co., ltd. devoting herself to the expansion of the horizon for Korean traditional clothing.

President Lee, who entered the university in 1976 as an art student with an aim of completing a painting genuinely Korean, soon faced the question, she spent her 20s and 30s learning an variety of intangible cultural forms such as play, mask dance, altar portraits of Buddha, folk painting, Korean instrument playing, folk tales, and so on, in an effort to transcend art, a tangible cultural form, and thus challenging common ideas.
In 1984, Lee established Korean Life and Culture Research Center and held an exhibit in commemoration of the establishment of the art group “Dureong” seeking a way of circulating visual arts without relying on the standard route, art galleries. As a result, she turned to cartoons, prints, and hanger paintings, and circulated her paintings through daily products such as calendars, cards, handkerchiefs, clothes. In that prosess, she opened her eyes to the “effect of clothes” in circulating paintings and stared promoting “the Movement for wearing Korean traditional clothes”.

People put emotional distance between themselves and a painting when that painting exists as a work of art. However, they feel quite comfortable expressing their ideas of the painting when it exists as a decoration of clothes, which motivated her to make clothes in thd first place. There are several other factoers that attracted her to thd trade. Second, she noted that while paintings displayed in a gallery are viewd by only a small number of visitors, those in clothes can reach out to more people as clothes become a moving gallery. Third, clothing itself is a cutting-edge art-a movingsculpture-that expresses itself through a living being.

Forth, our behavior and way of thinking depend upon what we wear. President Lee thought that clothing could bridge the gap between art and the public allienated from each other in the modern world. Fifth, she thought that “tradition” could be a short cut to the understanding of modern culture if everyday life reflected culture.

Last, but not least, chlothing is ans effective medium to express a sense of community. With these ideas in mind, she has held fashion shows that combine an variety of art forms including dance, song, theater, and film as well as Korean traditional entertainment. Held twice a year since 1984, Lee’s fashion show showcases “the Movement for wearing Korean traditional clothes” with the general public poised as models. Lee’s clothing drew feverish responses from those who had sharedthe same idea with she nationwide, which motivated the popularity of what is now called “saenghwal hanbok.”

President Lee is also involved deeply with natural dyeing. Having realized the importance of natural dyeing, in 1994, she learned from late Hahn Sang-Hoon, natural dyeing that has handed down since the Joseon period. Later, she participated in the industrial generic technology program sponsored by the Ministry of Commerce, Industry, and Energy and completed several projects including “the modernization of natural dyeing” and “development of sportswear using linen” in partnership with the Korean Academy of Industrial Technology (KAITECH) for three years. In addition, President Lee grew crops in some 33,057㎡ field in order to use them as the source of natural dyes. She experimented with the crops she harvested with the help of local farmers and many KAITECH researchers for many years and succeeded in making naturally-dyed various sportswear ranging from the uniforms of national sports such as archery, kigong, keomdo(Korean traditional fancing), and taekgyeon to golf apparel and held a naturally-dyed sportswear fashion shos as the final report of the project. Since 1999, President Lee has participated in carious international events including Germany’s trade fair CPD, France’s Pret-a-Porter, Paris Expo and Millano Expo. She also opened a showroom in Paris for a certain period of time and exported heer clothing to Germany and France. She also launched a joint brand with a well-known company in Paris. With her experience in Europeas the basis, She now aims to work independently and make a foray into the clobal market.

In 2013, President Lee opened a life-culture center Moobong hun, where she has organized 13 temporary exhibitions, up to this day, presenting the artworks of young Korean artists. On February 2019, she directed a biographical play of Korean female independence fighters combining two distinct genres, history and art. Based on such attempt of genre fusion, she now attempts to present a cultural product combining history and clothing.